Hello and welcome to another play diary This entry will be bit of a flashback to those couple of weeks in the summer where I got very into a bunch of cardboard tubes. Hope you enjoy! 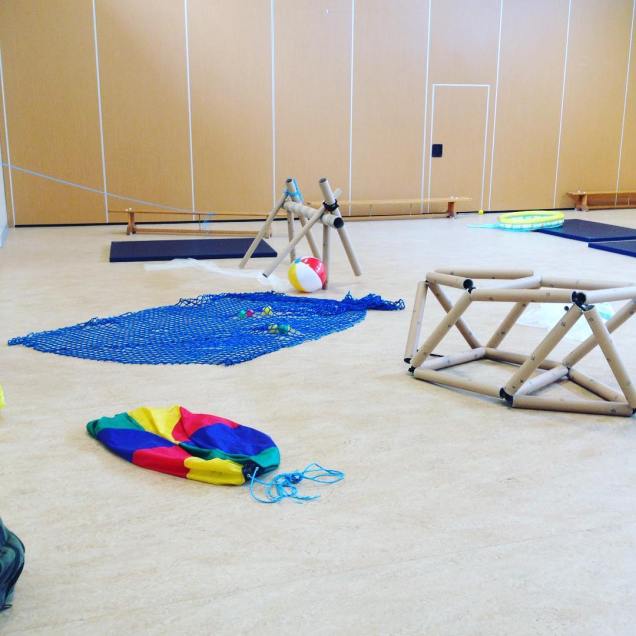 [photo shows a bare gym hall which has been filled with a variety of structures, mats and balls. They are set up in a temporary way to allow anyone to come in a explore and play. There are two different cardboard tube structures, a blue net with small coloured balls under it, a beach ball, and colourful parachute] 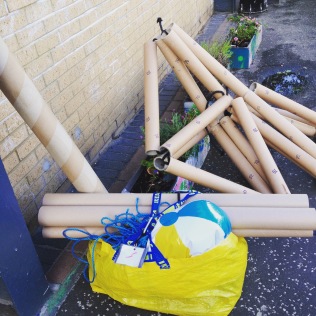 [photo shows a collection of objects on the pavement next to a building. There is a large structure made of cardboard tubes. Several loose tubes of varying sizes and a bright yellow bag with a beach ball poking out of the top} 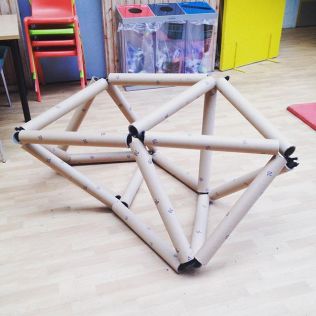 [photo shows a sculpture made up of large cardboard tubes. It’s held together by elastic running through the tubes. It’s a geometric structure with a lot of triangles making up its shape]

Back in the summer I got the opportunity to go into a local play scheme and run a play session for a bunch of kids/teens with varying needs and abilities. Not really knowing a lot about who I’d meet or what they’d want from me I decided to focus on creating a play environment rather than thinking up activities or games. I think about play spaces a lot and I find working in this way; creating the space for the play to happen, rather than initiating or leading the play myself, is always exciting and challenging.

Changing a space changes the way we move within it, we enter the space and it has new potential; when a familiar space becomes a little less familiar the rules and expectations for what we do in that space get fuzzy around the edges making new room for creation, mischief and discovery. We’d had a huge haul of cardboard tubes appear in the art room at the playground the week before and i’d been desperately excited to do something with them. This felt perfect; it was just a question of how many I could fit in a taxi with me.

On the day I arrived at a high ceiling-ed, kind of chilly, gym hall carrying several cardboard tubes, parachutes, plastic and inflatable balls, a large blue net, several ropes and a large structure I’d made using strong elastic and (more) tubes. I set about creating a temporary playground. I had balls hidden under a net, precariously balanced tubes, a bubble wrap bag filled with more coloured balls and a rope strung up from the top of a door to the bottom of a bench with movable parts attached. I was pretty happy with what I’d done and looking forward to seeing things play out. 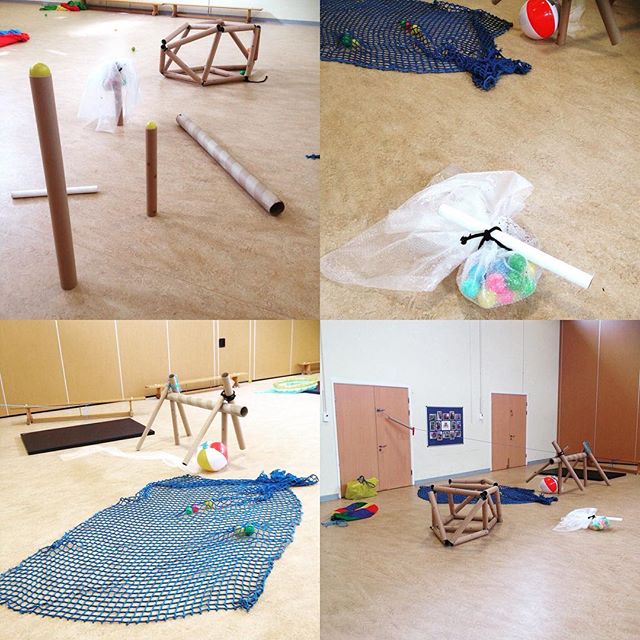 My first visitor was instantly drawn to a pile of loose tubes and began to build. I was super impressed with his patience and ingenuity as he problem-solved his way to creating the structure he had in mind. He wasn’t very flexible about what he wanted to create but was plenty flexible about how he would get there. Ten minutes later he walked of grinning without a glance at anything else in the hall. His work clearly done.

My next group were a young excitable bunch who wanted everything, all at once. The newly built structure was quickly dismantled and investigated in every possible manner, balls were kicked, thrown and pushed through tubes and in the shortest time the space looked completely different again. One child was enjoying spinning between moments of close inspection of the elasticated cardboard structure. I picked it up and he got inside with me and we span the entire thing around and around. I created a loop with a piece of spare elastic that I could stand in with him and spin whilst experiencing the pressure from the band around our lower backs. Another would not rest until he had exhausted the sensory potential of every object. I love to see this level of focus and exploration. Some played for a few minutes, some played the whole session and all played uniquely.

Throughout the day I saw the space morph between a place to run and jump or rock and relax. And although I was a little sad to pack up and leave I did it contentedly, feeling justified in the slight-cardboard-tube-mania that had gripped me for the last week.

Welcome to my “Play Diaries” series.  I do many, many things, but my favourite is being a playworker at The Yard Adventure centre in Edinburgh. The Yard is a fantastic and wonderful place;  primarily it’s a play service for young disabled people and/or young people with additional needs. We also run a public opening session every Sunday which i’m involved in the planning and running of. Here expect to find many messy, surreal and playful tales from the Yard and beyond!

Check out my workplace The Yard and find out a bit more about what we do. It’s a fantastic organisation and place! Or find us on Facebook here!